Islamic marriage (nikah) is not an engagement! 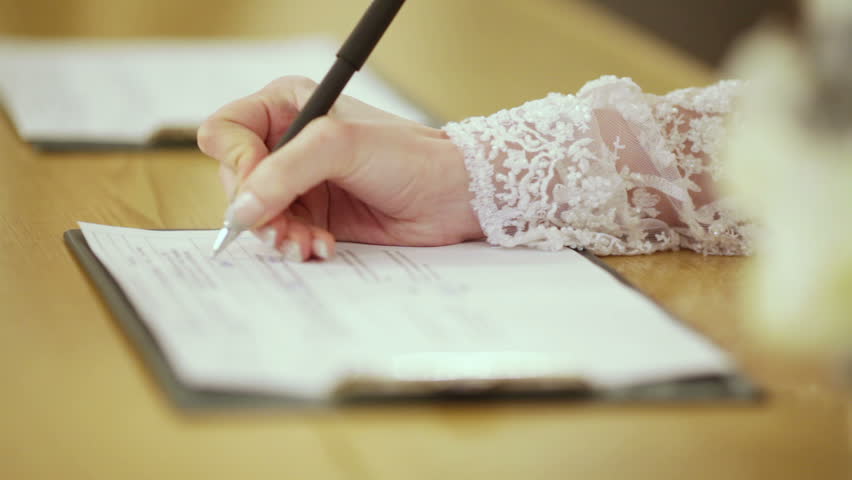 This past year, I had two wonderful friends who were devastated by a highly questionable tradition… The katb al-kitab or the Islamic nikah. Now, you might ask what can possibly be questionable with the Islamic marriage contract? Well, nothing is wrong with the actual nikah. However, when some people twist the nikah to fit their cultural norms, it causes significant heartache and headache for many… And all this ache I must add is what God’s guidance seeks to prevent by following the right way of doing nikah.

How do we mess up the Islamic marriage contract then?

Many Muslim families have their children sign an Islamic marriage contract (nikah) when the couple (and the families) DECIDE to get married. Notice that in the minds of these families, these two people are not actually, actually getting marrying. They only sign a contract to make their ‘hanging-out’ halal in the eyes of God but the actual, actual wedding and starting to live as a married couple in their own house happens months (sometimes years) later! So basically the nikah is done in lieu of an engagement.

What is wrong with this picture? Afterall, aren’t these parents just looking out for the chastity and “halalness” of their beloved children?

Well, yes and no. If they are really, truly, and purely concerned with the “halalness” of their children (above and beyond the “what would people say” concerns of their cultures), they should follow the letter of God’s law. Islamic marriage is Islamic MARRIAGE. It is not an engagement.

Once the nikah is performed, these people become husband and wife. With the full rights and responsibilities of a married couple in the eyes of God. All that is khayr (good, blessed) should be hurried and not delayed because Satan and our lowly-nafs seeks to destroy good done in the name of God… In essence, the nikah is a contract done with God… We get married for the sake of God to fulfill our deen.

Why are these nikahs wrongly treated as engagements, so harmful?

They make a mockery of the sanctity of the Islamic marriage. To begin with, there is no wedding. There is no wide-spread announcement of the union. There is no new house for the couple to start living together… Yesterday is no different than tomorrow. They continue living their lives as before, just that they are wed in the eyes of God!!!

50% of marriages end in divorce. Take a wild guess how many engagements just dissolve into thin air? And what happens to these young people? Their trust of the marriage union? Their trust in the opposite gender? Their trust in God?

I have been coaching a young, intelligent, educated, beautiful friend through her marriage quest. She considers herself a divorcee because her family and her social milieu consider her such. And of course for her social milieu being a divorcee is a taboo. Regardless of the fact that she has never spent time alone with this so-called ex-husband of hers.

She had nothing more than a broken engagement. But thanks to this bizarre practice of doing Islamic marriage contract as a form of engagement, she has been ‘labeled’ so much so that it is affecting her future prospects.

When I witnessed her referring to herself as a divorcee and heard that she went to a divorcee meeting, I had right about enough of this nonsense. I assume there are many more victims of this wrong practice, which triggered me to write this post and get this word out there to help others.

Why are the proponents of these wanna-be nikahs hypocrites?

Hypocrisy #1: Their reasoning for wanting the nikah is wrong.

Islamic marriage is marriage, period. So families should not use it as an engagement act so their children won’t sin. When they do the nikah, they don’t treat it as a nikah: they still expect the couple not to consumate the marriage or fulfill all the rights and responsibilities that come with marriage. Fully being aware that engagement is not marriage, these pseudo-unions fall apart more frequently than an actual marriage.

Hypocrisy #2: Nikah is not a big deal, but only until the engagement is off!

At the beginning families treat it as ‘not a big deal’ meaning they see it just as an engagement (no wedding, no home…etc.). But when the engagement is off, then they treat the nikah as an actual nikah, which ended in divorce.

Hypocrisy #3: After nikah, husband and wife’s rights and responsibilities to each other begin.

Which means, mom and dad, you are no longer the first and foremost ‘authority’ in their lives. You cannot disregard that now they have rights and responsibilities to each other for which they will be held accountable to God. When you most often interfere with these spousal rights and responsibilities between the young couple, you are interfering with their contract with God.

Hypocrisy #4: Divorce is not a taboo!

Oh, how far off we are still from the practice of the Prophet. He married Zainab (r.a.) who was a divorcee. All of his acts are to teach us something. But unfortunately we pick and choose which sunnah we think is more important and which to completely ignore (or to do just the opposite).

Why is this practice wrong Islamically?

Islamic marriage should be done at the time of the actual wedding when the couple will actually start living together as a married couple and the entire community is made aware of the wedding.

This way they will start to carry the full weight of the marriage, treat it as an important contract done with God, start to fulfill the rights and responsibilities of husband and wife, being fully aware that they will be held accountable for these. If and when they treat a nikah as a nikah, it is much harder for this real nikah to fall apart.

So essentially the issue is that they are treating the nikah lightly, which leads to lots of unnecessary divorces.

On a related topic, these same people who insist on a nikah (primarily because their pre-Islamic patriarchal cultures are obsessed with chastity of women in ways that are not Islamic), completely skew the emphasis Islam puts on the Islamic written marriage contract.

The goal of the contract is to avoid future qualms by specifying and detailing the rights and responsibilities of the couple (beyond the basics outlined by Islam). However, most often, when a woman wishes to have a detailed marriage contract, she is put down as being too improper by her family. So the one chance (God-given chance) to protect her rights and wishes down the line is lost…

Here is a testimonial of how this practice has affected someone:

Being a very self-aware and introspective individual, I am used to knowing my “place” in the world, the weight I hold, and what about myself I should focus on for improvement, and when. I’ve always been able to balance that with the understanding of how I make people feel through my interactions. Quite frankly, I have a very open heart and I wear it on my sleeve, and it’s really strange for me to inflect and change my presentation and actions based on what I am expecting the other to say – which is what I do now, to protect my heart.

I’ve gone through the experience of having a nikkah – with the essence of an engagement, since we were not living or spending any time together – but being considered “married” once things didn’t work out. The nikkah wasn’t treated as such during its span, as we weren’t given a peek at our rights and responsibilities; yet when things didn’t work out as envisioned, society granted me the label of ‘divorcee’. This often leaves me upset in so many ways; my feelings usually revolve around wondering why a nikkah of such a nature was ever encouraged as the ideal option at the time, and also about how and why society can sometimes be so insensitive and cruel towards someone because of something that took place in their past.

I don’t like to identify myself as a “victim” of it, but it has become a vicious, self-perpetuating social and emotional cycle that I’m sometimes unable to catch myself in. Why? I’m so focused on societal constructs and skewed expectations, that I begin believing that I need to fit into them in order to function.

The quest for marriage again after my experience was something I willingly embarked on when I felt ready. Since then, however, most of my experiences have left me in awe at the nature of our society. Islam aside – let’s forget for a minute that our beloved Prophet, peace be upon him, lived, breathed, and preached kindness through every moment and action of his life – how can human beings be so unaffected by how their words and actions affect the heart of another? Despite having full knowledge of what my nikkah entailed, I’ve been subjected to an insurmountable amount of uncomfortable and off-the-wall questions from others:

“If you weren’t really “married”, then why did your “engagement” last so long?”

“Your “engagement” lasted 2 years… I find it hard to believe that you didn’t spend any time together during that period.”

“If you just wanted to act engaged, why did you get your nikkah?”

“You had your nikkah… so technically, you could have spent “alone time” together… hmm…”

“You’re a great person. And I have no problem with your past. But you know how society treats divorcees… and technically, you are one, and I don’t want to be a part of that battle.”
I know I have no need to justify this, but truthfully, we didn’t even live in the same country! And these people are aware. The people who have asked me such questions are typically suitors and their families. They are so wrapped up in warped cultural shadows that they have lost all sense of how much they can hurt someone with their curiosity and have no understanding of the weight of their words. Hoping for them to step out of their cultural bubbles is just that – a hope.

After endlessly running into this grief, now when I meet or am introduced to a prospect for marriage, the first thing that comes to mind is how I will present my previous nikkah/engagement to them. I feel the need to defend myself to avoid getting hurt with possible questioning and doubt again, before even thinking about what the person has to offer ME, and what I’M looking for in them.

This all leads me back to wondering why I allowed this nikkah/engagement phenomenon become a part of my personal life. It truly is a cycle. It becomes so hard to break out of when the societal norm dictates how people can treat one another – heartlessly. I know that the “what if’s” change nothing, and ruminating over and questioning the past won’t change anything, but it has definitely molded my stance on the matter. I understand that individuals commit to engagement-style nikkah for various reasons, but I wholeheartedly wish that people would move away from this practice. Of course, things will always work out the way Allah wills, but it is also important to safeguard our hearts from a cycle of potential disdain.