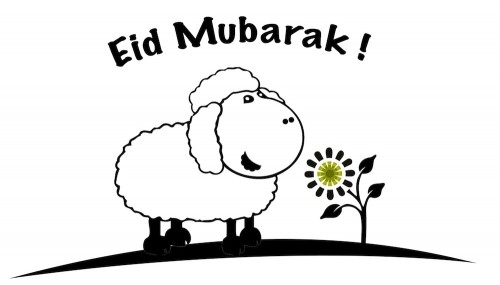 Laying Down Illusions Under the Knife of Mercy:

The story of Prophet Abraham attempting to sacrifice narrated in the Quran is worth reflecting on especially during this season of pilgrimage and Eid of Sacrifice.

Prophet Abraham’s attempted sacrifice of his son is narrated in Sura 37 right after the brief mention of how Abraham (peace be on him) challenged idol worship among his people, and his angry interlocutors decided to throw him into a blazing fire (Q. 37:83-98). The text alludes to his being saved from the fire, his migration for God and then moves right onto the sacrifice story:

They wanted to harm him, but We [God] humiliated them. He [Abraham] said, ‘I will go to my Lord: He is sure to guide me. Lord, grant me a righteous son’. So We gave him the good news that he would have a patient son. When the boy was old enough to work with his father, Abraham said: My son, I have seen myself sacrificing you in a dream. What do you think?’ He said, ‘Father, do as you are commanded and, God willing, you will find me steadfast.’ When they both submitted to God, and he had laid his son down on the side of his face, We called out to him, ‘Abraham, you have fulfilled the dream.’ This is how We reward those who do good- it was a test to prove. We ransomed his son with a momentous sacrifice, and We let him be praised by succeeding generations. ‘Peace be upon Abraham!’ This is how We reward those who do good: truly he was one of Our faithful servants.  (Q.  37:99-111, Abdelhaleem translation)

An important feature of the story that is different from the biblical narrative is the conversation between Abraham and his son, and the son’s explicit consent to the sacrifice.  Moreover, Abraham discloses not only his intention to the son but also his source of inspiration. In other words, he does not simply say to him, “God wants me to sacrifice you,” rather that he sees in a dream that he is sacrificing him. Thus, his question to his son ‘what do you think?’ could be interpreted both as consulting about sacrifice ‘shall I go ahead with God’s command?’ as well as about the inference ‘is this dream a Divine command?’

Each verse in this Quranic passage is worth reflecting on and is full of meanings. In what follows, I shall just share some drops from the ocean of its meaning.

A Message of Surrender

The Quran’s essential message is to show how the world is a mirror revealing the Creator, who constantly arranges and maintains the whole universe every moment.  Indeed, our life is a journey to God. And, God speaks to us each in our context. This sacrifice story surprises us: a command to sacrifice your beloved for God? It would be an insane act if anyone else other than Prophet Abraham would attempt to do it! The story is provocative and full of insight.

There is a symbolic story by a famous Muslim, Mawlana Rumi, that may help us unpack some of the meanings of this profound Quranic narrative. In this symbolic story, there is a chickpea boiling on the stove. It starts jumping around in the cooking pot, and screams for being taken out. It complains to the housewife who put it there, asking her why she is doing this to her; if she cared enough to buy it from the market, why is she now throwing it to fire? The housewife in response pushes with her spoon the chickpea back into the pot saying, “Boil nicely and don’t jump away from one who makes fire. I do not boil you because you are hateful to me: nay, it is that you may get taste and savor.” The conversation between the chickpea boiling in the pot and the lady of the house goes on, as she encourages the chickpea to receive the cooking process as a kind opportunity rather than a curse; as a result of being loved rather than being despised.

The conversation between the chickpea and the housewife is a metaphor for the relationship between us and our Merciful Creator. The point is to be aware that whatever befalls us is meaningful. It is normal that the soul first sees many events as bitter, and even feels victim, but in reality they are essential for its transformation for the better and full of good. Elsewhere, Rumi notes that the difficulties in life are painful to the person who is not conscious that His mercy is unbounded and who resists change for the better. And, the Quranic prophets are great examples of being receptive to growth and transformation. They display the wisdom of perceiving God’s mercy even at the face of most difficult events:

The wise man is as a guest-house, and he admits all the thoughts that occur to him, whether of joy or of sorrow, with the same welcome, knowing that, like Abraham, he may entertain angels unawares. Let grief as well as joy lodge in the heart, for grief is sent for our benefit as well as joy. Endure woe patiently, like Joseph and Job, and regard it as a blessing, saying with Solomon, “Stir me up, O Lord, to be thankful for Thy favor which Thou hast showed upon me! [Q.27:19]”[ii]

In other words, the prophets set an example of living with awareness of who is taking us through life. When they welcome what befalls them, they are not just being ‘blindly patient,’ i.e. their patience has nothing to do with grudgingly waiting. Rather, it is the waiting of someone with trust and curiosity. They ask, “what do you have for me in store, my Lord, who is infinitely wise and merciful?” Let us keep in mind that only the one who takes time to meditate about all the blessings she is surrounded with starting with her existence will discover the Merciful Creator, and thus can persevere in the face of adversity. Prophet Abraham was giving this challenging test for his growth only after his journey of reading signs of God all around him.

Thus, the story of Abraham’s attempt at sacrificing his son invites us to the realization that there is wisdom and mercy behind everything. In Rumi’s parable of the chickpea, the housewife says:  “O chickpea! I am Khalil [Abraham], and you are my son, lay your head before the knife, for, I see in my dream that I am sacrificing you.” (III: 4174) Like Ishmael (or Isaac), one need not worry or be afraid before the knife of “calamity,” which is a blessing in disguise sent by God. What is to be slaughtered by such calamities is not the real head, but that which blocks one from God. While, the “real head,” cannot be ever severed nor can it die. (III: 4175-6)

The story of submission of Abraham and his son before that apparently very painful Divine command serves as a clear reminder that God is the one whose love and power can be trusted unconditionally. The story can be translated to everyday life as willingness to see even the most unexpected event as being commissioned by the One who is both loving and majestic. It calls us to pause, to reflect on our common assumptions about life, to take into account our experience, and hear the voice of heavenly revelation and our heart.

This story calls us to discover that God is never against us. How can the source of our existence and the One who makes us yearn for happiness be against us? This is what Abraham and Ishmael must have realized as they responded to the vision. They knew that if it is a command coming from God, then it is good. How did they get there? Let us intend to explore this question this Eid season inshallah.

This season of sacrifice, let us also take time to look at situations in which we feel victim, where we feel that we are crushed under uncontrollable cruel events. Could it be that we are misunderstanding what is going on?  Could it be that our Creator wants us to change the way we look at our beloveds, instead of being against us and our beloveds? After all, both Abraham and Ishmael come out of the sacrifice alive and healthy, unharmed. At the same time, they were not the same, both were transformed. May we all be transformed this Eid, may the sacrifices offered throughout the globe in this season be made with deeper awareness and surrender to God.

As the passage in Sura Hajj notes: (M. Asad translation, and I shall underline what we addressed a bit in this essay)

And [thus it is:] unto every community [that has ever believed in Us] have We appointed [sacrifice as] an act of worship, so that they might extol the name of God over whatever heads of cattle He may have provided for them [to this end]. And (always bear in mind:) your God is the One and Only God: hence, surrender yourselves unto Him. And give thou the glad tiding [of God’s acceptance] unto all who are humble – –

all whose hearts tremble with awe whenever God is mentioned, and all who patiently bear whatever ill befalls them, and all who are constant in prayer and spend on others out of what We provide for them as sustenance. (Q. 22:35-36)

[i] In this essay, just to keep with the general view I shall refer to the son as Ishmael. In reality, the Quran does not name the son involved in the sacrifice and whether he was Ishmael or Isaac was debated in the exegetical tradition. Yet, the story has the same ‘punch line’ regardless of who the son was, for both brothers, Ishmael and Isaac, are honored in the Quran, and neither one is presented as having a more privileged connection to God than the other. Perhaps the silence of the Quran regarding the identity of the son is a way of protecting the lesson of the story from being lost in inter-communal competition.